The world´s first bench made from ownerless marine plastic 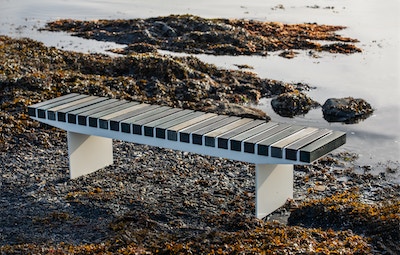 Earlier this year, Vestre took the initiative to set up Ogoori, a company which is aiming to clean up the plastic waste from our oceans and recycle it for use in furniture design. Now Vestre is launching the Coast bench, which is made entirely from ownerless marine plastic collected by Ogoori, which Vestre in turn leases from Ogoori.

Recycling marine plastic and turning it into furniture is both a complex and time-consuming process which requires substantial resources. Coast is Vestre’s first shining example of what can actually be achieved through not just collecting marine plastic, but also using it to create something completely new. The bench, which is the first of its kind in the world, is designed by Allan Hagerup, who previously created the Kong and Dialog collections, among other things, for Vestre.

- It’s an inspiring and gratifying task to design a bench that uses plastic collected from beaches with the help of volunteers. So it feels really good to have created the first bench from this material for Vestre, and to contribute to sustainable development with a product that will be accessible to everyone-, says Allan Hagerup.

Coast is made from steel which has been hot-dip galvanised and powder coated, with seating surfaces made of plastic collected from Norwegian beaches, where the ownerless plastic accumulates, destroying nature and natural cycles. Coast is a solid bench, built to endure outdoor use in marine environments. Allan Hagerup explains that the project has largely been about the plastic itself and the story behind it. This has guided both the form and the design process. The circular economy of reusing material – in this case material which has so clearly been rejected by society and not recovered through controlled cycles – has also been a focus throughout the whole process. 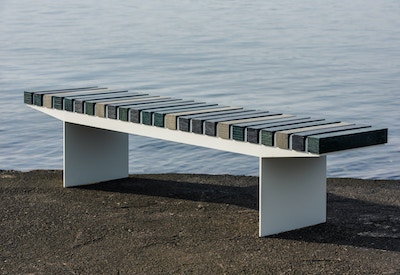 -To visualise this cycle, it made sense to create a product that communicates with the ocean. Coast is intended to be placed on a jetty on the waterfront or on a rocky archipelago, so you can sit on the bench and look out over the sea-, says designer Allan Hagerup.

The plastic's history is also reflected in how the shape of the bench has borrowed its design and theme from the marine environment. From the front, you can make out the outline of a boat’s hull, and the plastic parts lie in a row, submerged in the protective steel frame, giving the impression of floating on the surface. The steel frame extends upwards on thin legs and lifts the plastic material onto a pedestal.

-The design has been kept as simple as possible so that it doesn’t take focus away from the marine plastic, says Allan Hagerup. 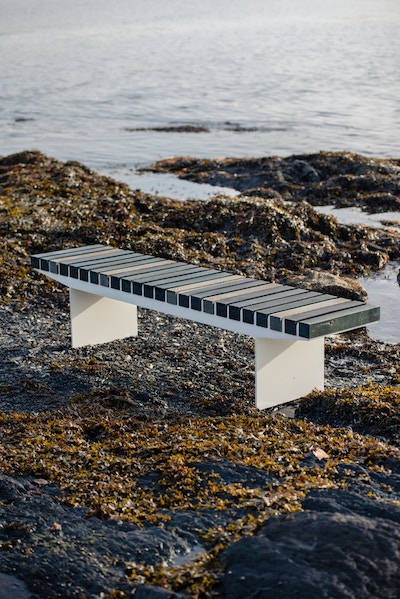 As a first step, Vestre has produced a prototype of the bench. As the raw material is not new and not as high quality as new plastic raw material, tests will then be carried out, for example for toxicity and UV degradation, with the goal of launching Coast on the market in a limited edition by 2021.

- When the material is of variable quality, it is important to consider what happens to the plastic over time outdoors. To prevent erosion, the plastic parts must be replaced at regular intervals. Through a deposit system or through a lease with regular servicing by Vestre. The frame is therefore shaped so that it is simple to replace the plastic parts as needed. Of course, the used plastic is recycled again and turned into new products-, explains Allan Hagerup. 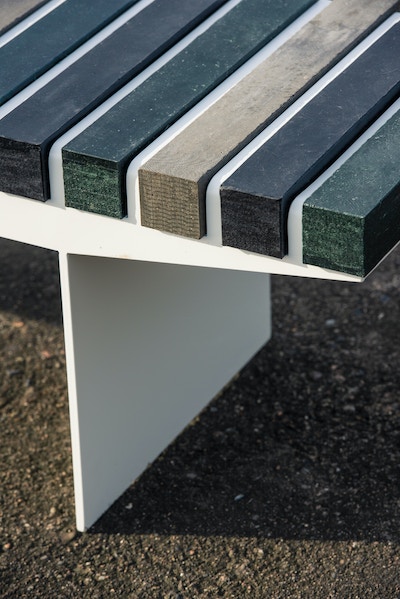 Cooperation the basis for Ogoori

Vestre carries out our work with Ogoori in collaboration with several other industry players who contribute in different ways to making the project possible, among them the circular furniture manufacturer Ope, environmental activist Rune Gaasø and the organisation In The Same Boat, whose volunteers help to collect large amounts of the marine plastic. Tracking the plastic and its origins is made possible with the help of blockchain technology from Empower.

Thanks to the unique contribution and commitment from all those involved, Ogoori can offer the market a traceable plastic raw material with a guarantee of origin – that origin being 100 percent ownerless marine plastic. The plastic raw material also carries a lasting tale of belief in making the world a better place through cooperation, community and personal involvement, ensuring that every little piece of plastic has been picked up by volunteer or professional beach cleaners, so that it doesn’t litter, pollute, get eaten or broken down into microplastic in the future.

- The world is currently in a transition period and Vestre hopes that Ogoori can act as a showcase for how the correlation between growth and resource consumption can be broken. The development of Ogoori will be important for the rest of Vestre’s work and can hopefully inspire other industry players too-, says Jan Christian Vestre, CEO of Vestre.

The most common rubbish found on beaches and in the sea is plastic. Over 150 million tonnes of plastic are floating in our seas, and every year the amount of plastic increases by between 5 and 13 million tonnes. At the same time, far too little plastic is recycled. In Europe, barely one third of the annual plastic waste of approximately 27 million tonnes is recycled. In the Mediterranean Sea, which is an inland sea with a lot of industry, intensive marine traffic and 200 million tourists every year, 95 percent of the rubbish on the beaches and in the water is made of plastic.

Often the rubbish is something which has only been used once, such as sweet wrappers, straws, and plastic caps. The majority of all rubbish found in the sea has been discarded on land and transported to the sea by rainwater, wind and rivers. In the sea, the plastic rubbish decomposes slowly into smaller pieces and eventually becomes so-called microplastics, which don't deteriorate for many hundreds of years but remain in the marine environment and make their way further up the food chain.

The fact that the world's oceans are massive plastic dumping grounds is something that seriously affects flora and fauna. Whales, seals, seabirds, turtles and many other animals get caught in the rubbish and drown, starve to death or become severely injured. The animals that eat the plastic rubbish suffocate or get internal injuries; the plastic pieces can also give them a false feeling of fullness which effectively causes them to starve.

According to WWF, it is estimated that 90 percent of the world's seabirds have fragments of plastic in their stomachs and 18 percent of all tuna and swordfish have plastic waste in their stomachs – mostly cellophane and PET. In many places, even plankton are extremely polluted as a result of plastic. Many fish and other marine animals also mistake microplastics for plankton and mistakenly eat the harmful plastic in their search for food. Plastic waste in the marine environment also includes organic pollutants such as pesticide, phthalates, PCB, and bisphenol A. The plastic pollutants can interrupt important biological processes and cause liver damage or hormone disruption.